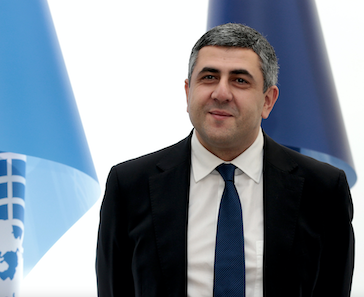 ZURAB POLOLIKASHVILI, SECRETARY-GENERAL OF THE UNWTO

"Our sector gives them the chance to make a living. To earn not just a wage, but also dignity and equality. Tourism jobs also empower people and provide a chance to have a stake in their own societies – often for the first time."

Zurab Pololiskashvili has been Secretary-General of the World Tourism Organization (UNWTO) since January 2018. Prior to this, he worked in a number of high-level roles in both the private and public sectors.  After graduating with a degree in banking, Mr. Pololikashvili gained extensive experience in the private sector, including with a prominent role in one of Georgia’s biggest banks and as CEO of the country’s leading football team, FC Dinamo Tbilisi.

After a year as Deputy Minister of Foreign Affairs, he was appointed the Ambassador Extraordinary and Plenipotentiary of Georgia to Spain, Andorra, Algeria and Morocco in 2006, and was then his country’s Minister of Economic Development between 2009 and 2010. In this position, Mr Pololikashvili oversaw the development of tourism within Georgia, establishing the sector as a leading employer and contributor to national economic development.

At the 23rd General Assembly of the UNWTO, Member States unanimously approved his plan of action for global tourism, including the landmark Agenda for Africa and his focus on promoting tourism as a driver of gender equality, job creation and rural development.

As the COVID-19 pandemic presented tourism with the biggest crisis in the sector’s history, Mr Pololikashvili guided its response and recovery, winning political and practical support from governments and international organizations and uniting stakeholders around shared solutions and harmonized protocols. Under his leadership, UNWTO gained unprecedented visibility and prominence within the United Nations system, strengthening bonds with other key agencies and placing tourism at the heart of the wider agenda for recovery and sustainable development.

At the end of 2021, Member States met in Madrid for the 24th UNWTO General Assembly. They voted for Mr Pololikashvili to serve a second term as Secretary-General, giving him a clear and strong mandate to guide the restart of tourism and advance the key priorities of jobs and education, tourism and rural development and sustainability.

This website uses cookies to improve your experience while you navigate through the website. Out of these, the cookies that are categorized as necessary are stored on your browser as they are essential for the working of basic functionalities of the website. We also use third-party cookies that help us analyze and understand how you use this website. These cookies will be stored in your browser only with your consent. You also have the option to opt-out of these cookies. But opting out of some of these cookies may affect your browsing experience.
Necessary Sempre activat
Necessary cookies are absolutely essential for the website to function properly. These cookies ensure basic functionalities and security features of the website, anonymously.
Functional
Functional cookies help to perform certain functionalities like sharing the content of the website on social media platforms, collect feedbacks, and other third-party features.
Performance
Performance cookies are used to understand and analyze the key performance indexes of the website which helps in delivering a better user experience for the visitors.
Analytics
Analytical cookies are used to understand how visitors interact with the website. These cookies help provide information on metrics the number of visitors, bounce rate, traffic source, etc.
Advertisement
Advertisement cookies are used to provide visitors with relevant ads and marketing campaigns. These cookies track visitors across websites and collect information to provide customized ads.
Others
Other uncategorized cookies are those that are being analyzed and have not been classified into a category as yet.
DESA I ACCEPTA